The outline maps are finished and I've knotted them together.

The map is pretty peculiar, but I'm happy with it. It's also vast. It occupies approximately one 24-mile hex, Travel in the white tunnels (on a black background), due to rockfalls and other hazards, is at 4 miles a day except where otherwise noted (eg area 5Q it's faster due to straight well-made tunnels); travel in the beige tunnels (on the lilac background), which are generally less well-travelled, is at 2 miles a day, It would take about 11 days to cross the map from above Area 2 to below Area 6 - if one was trying to avoid the 42 encounter areas I've set up and only travel through the corridors (which of course have a bunch of wandering monsters, some unique to the zones that the PCs will travel through and some generic to the entire cave system). 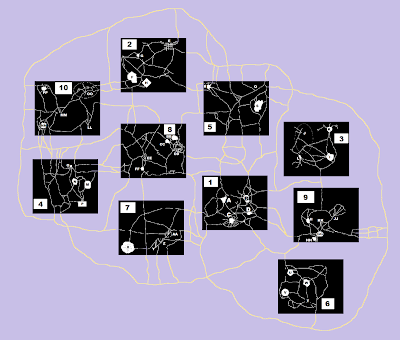 I've also started on some other maps and plans - for example, this is a typical Serpentman dwelling found in the environs of 1D (colloquially known as 'Snaketown'): 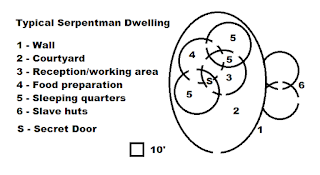 I've written some notes about the Serpentmen of Snaketown too:

...Serpentman culture is very unlike most human cultures. Serpentmen (and Serpentwomen) have very different ideas of privacy to humans for example, and will clean themselves, expel bodily waste and copulate in public with no qualms. They will usually eat in private however, and commonly wear voluminous hoods to cover themselves should it be necessary to eat in a public place. Serpentmen do not have banquets: eating in company is generally a very intimate affair reserved for mates and close confidants.

Serpentmen regularly shed their skins; this activity is also considered private. By extension, removing clothing in public is frowned upon. All beings in Snaketown are expected to remain in the same state until they are in private. It is perfectly acceptable to change one's clothes often, as long as no-one sees the process of changing. It is however considered bad form to remark on changes in appearance. To Serpentfolk, the fiction that appearance is immutable (and therefore that what someone looks like now is how they have always looked, even if they changed their appearance five minutes ago) is very important.
Also, the thought of sleeping in the open is both terrifying and shameful to them. Public sleeping (once a being has reached maturity) is a sign of degeneracy and members of the community are encouraged to kill any adult (whether Serpentman or not) who is found sleeping in public. Sleeping quarters in Serpentman homes are usually the parts most remote from the entrance and public reception areas. Only their treasure-rooms (sometimes concealed behind a secret door or trapdoor from the innermost and highest-status sleeping quarters) are better-hidden than their bedrooms...

Those cultural rules should get the PCs in trouble with the rulers of Snaketown pretty sharpish I should think.

I've also used my black-white-red-green-blue-yellow d6 as a Serpentman Faction Randomiser. Cyclopean Deeps has 5 'factions' of Serpentmen (these factions are something like a cross between a caste and a cult), which are the White-Red-Green-Blue-Yellow Factions. I added another, Black, and rolled to see which faction is dominant in 'Snaketown'. I shall be consulting the Serpentman Faction Randomiser further in due course but at least I have found a (somewhat limited) use for it.