By Order of the Mayor

It is the evening after the PCs return from the caves, and several of them are wandering around town trying to fulfil various tasks (getting a shield, trying to get hold of healing potions and such like). While doing so, they see a group of people affixing the following printed poster to various walls around town (which must logically have a fairly literate population, or they wouldn't bother... I presume that there will also be some sort of town crier-type announcement too, possibly in Common, Dwarvish and any other languages that might seem appropriate).

Oh, and it appears from the name that the Mayor might be a Halfling. I realised I hadn't named him (or her) and then I did and hey presto, Jasper Grubbily, a thoroughly respectable member of the Halfling business community, is now the Mayor... 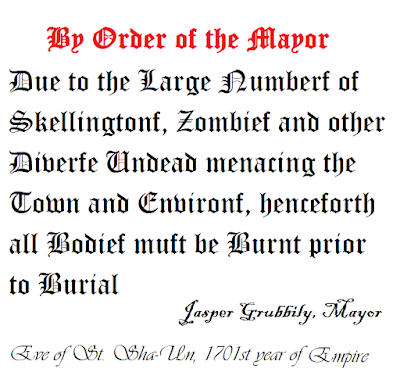 The Eve of St. Sha-Un is taken from the Labyrinth Lord calendar of the Church of Law and Order in the city of Dolmvay, which I'm patterning the Church of Issek on (as detailed in a post from a couple of years ago here). It's the 20th of Fish-month, more or less our 12th March.

The deliberate use of 'f' instead of 's' is basically a joke. In Early Modern English (and German until they stopped using Black Letter in about 1920 I believe) the letter s was often written ʃ - which looks rather more like an f to a modern English-speaker. Cue lots of hilarious jokes about people reading old documents and getting stuck (or maybe 'ftuck') when reaching the word 'suck'... as in 'where ʃucks the bee, there ʃuck I...'.

But as the text is written (or maybe carved?) in three hands, not all of them show, or even ʃhew, this trait... either that or I got tired and forgot to make it all consistent. Jasper, at least, knows how to do an 's'!