... as advertised yesterday, from Erny's blog here. Very quickly built with a gluestick rather than PVA, so it's a bit 'lifty' in places, which should be taken as a reflection of my shoddy building practices, not Erny's design, which is very nice.

If you are planning to build it, be aware that I think it needs more tabs than are on the actual model. Take a look before you start cutting is all I'm saying - you should be able to work out where they need to be... 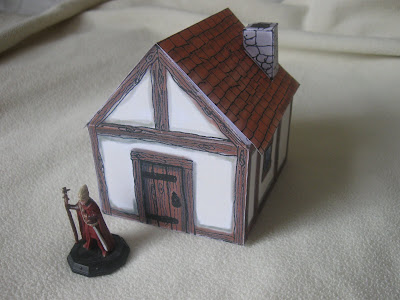 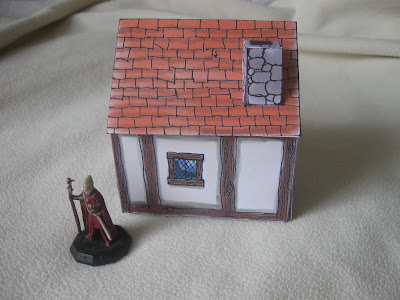 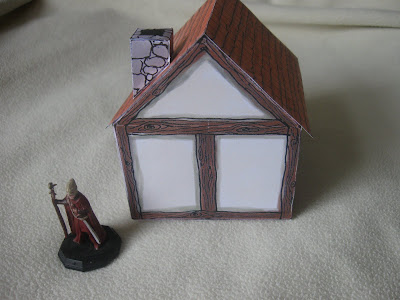 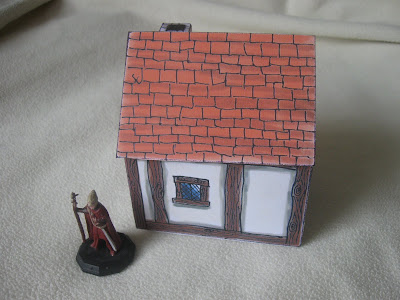 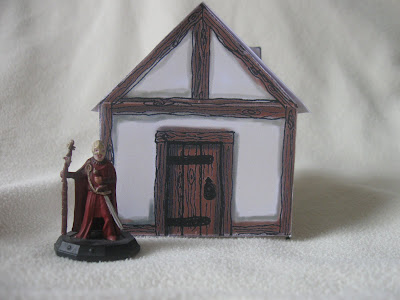 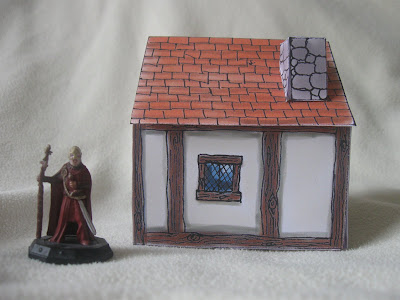 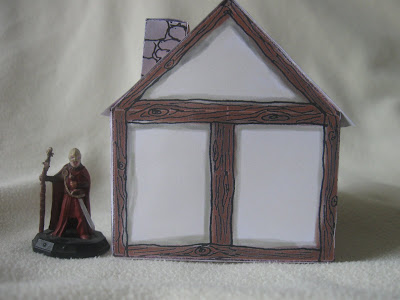 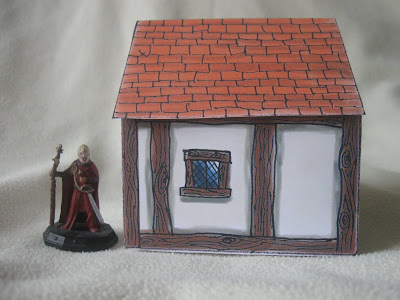 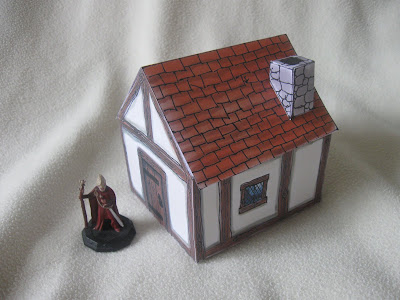 I need some buildings to represent the settlements that are being attacked and generally fought over when play Warhammer, LotR and D&D. So, first off I'm trying to make some generic long-house type huts, buildings that have a fairly wide historical span attached to them (Viking long-houses probably weren't massively different to neolithic European long houses, from 5,000 years earlier). I figure that there's no reason buildings of this type can't be from somewhere in the north of the Empire or Norsca, even one of the poorer parts of Bretonnia; in Rohan or anywhere in Eriador; or pretty much anywhere not tropical in any D&D setting.

I have some preformed bits of cardboard that I'm intending to use as roofs; I have some balsa to use as corner posts; I have some 'craft sticks' to use as planking; if I can get some stiff card (preferably corrugated) to use as wooden walls with plaster on them (OK, that's not a well-attested historical style, but I'm trying to make this out of easily-accessable materials so cut me some slack!), I'm sorted...

A spur to this is the terrain-building competition over at the small but perfectly formed Warhammer Fantasy Battle Reporter forum that is calling for gamers to submit Warhammer-compatible terrain.

Can I get my longhouses/long houses finished? Watch this space...

And, in other exciting medieval-style property development news, the lovely and talented Erny over at the Lead Adventure Forum tempted me over to his blog with the offer of a free house!

Hand-drawn by Erny, it's very much in the style of the old Warhammer cardboard buildings or 'Oldhammer', so I've downloaded it from the blog and hope to be building it as soon as I can find some thin plain card to print it on. Cheers, Erny!
Posted by Red Orc at 05:34 No comments: