Following on from a post some months ago about re-mapping Mystara as if the main map is like Ptolemy's and drawn from the point of Thyatis, I've started pulling it apart. 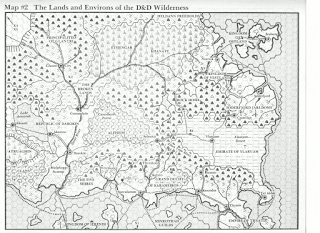 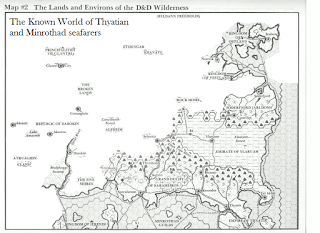 The top is what Thyatians imagine the world is like. The bottom is what they actually know fairly well, with the disconnected bits that they know about existing in an existential quantum void-soup somewhere beyond what is 'known'.

They know the sea-lanes around their kingdoms but not much land (except the areas where, in my version of history, the ancient human Empire united what is now the Grand Duchy, Thyatis, Ylaruam and the Soderfjord Jarldoms).

This dislocation actually helps with things on the map that don't make sense. For example, how does the 3,000 mile Streel River rise in hills maybe only a few hundred feet tall near the NE coast, then flow through the Broken Lands? It doesn't have to now, it might rise in the mountains of Glantri, but the rivers in the Ethengar Khanate can now flow west from the Broken Lands to the east coast, exiting via the NE fjordlands if that makes more sense.

But, perhaps, I'm looking at this all wrong. Maybe, it's simplest if the top map is 'real', and I now mess around with the bottom map to produce the map of the world as seen from Thyatis. That doesn't solve the problem of stupid geography ... but perhaps we can live with it.
Posted by Red Orc at 11:20 No comments: