Currently, with a mostly-1st Level party (only Gibbet the Thief has reached 2nd Level) the party is exploring some Level 1 caverns. I used the donjon dungeon generator for this area. It's an AD&D generator but fine for my purposes - I just have to change the odd monster details here and there. I use donjon's generators a lot - there are dozens on the site - and heartily recommend them to one and all.

So here is part of the map of the area - I've called this cave-system 'the Caverns of Ulfang the Black'. The players probably can't even remember who 'Ulfang the Black' is, but never mind. Perhaps they'll be reminded at some point.

Heavily redacted are the tunnels the players haven't gone down yet - just marked with arrows. 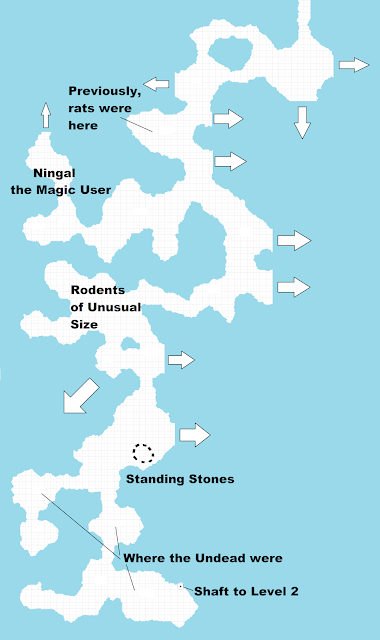 We reached something of a milestone on Sunday 12th August - our 13th monthly session and therefore our first birthday as a open table campaign (technically, our first session was Sunday 13th August 2017, but I can't help how calendars work - we were back round to the second Sunday in August, that's the important bit).

Apart from me, we've had at least 15 players and something like 20 PCs (RIP Fighter Bob, Fish Eye Len the Thief, Sven the Dwarf and Polly Pepperoni the Magic-User) as well as a few NPCs (RIP Vortigern the Cleric and Keith the Orcish lantern-bearer) going down to the caves to kick monster-butt.

At the thirteenth session, the party consisted of:

As a result of the proclamation from the Mayor about 'diverse Undead' and the necessity to burn corpses, the PCs decided to load up with flasks of oil before their expedition. No problem, oil is a fairly common commodity in Rift City. So they ended up with about a dozen flasks between them.

They decided that they would continue to explore the caves in the same area where they were at the last session. Ningal 'the Mad Witch' (as the PCs keep calling her) had given them a rough map with some locations marked on, including a ring of standing stones. As these are underground it's unlikely that they are for astronomical observation, but perhaps they are really ancient and the mountain grew over them..? Anyway the PCs were intrigued and decided to check out the location.

First however, they had to deal with infestations of spiders. The wandering monster table for this area included several listings for swarms of small spiders, as well as the notions on the map claiming that different areas were the home of 'spyders' (Ningal's spelling is not necessarily standard). Rolling on the wandering monster table for the party's first encounter, I came up with a spider swarm. They discussed briefly whether small spiders were really all that bad, and then, having decided that they could still be poisonous even if small, with a combination of missile-fire and burning oil, the PCs wiped out the spiders. After this, the party headed vaguely south again through the caverns.

Shortly after this, I rolled for another wandering monster. OK, let's see what it is this time... oh, a spider swarm. This time the spiders were following down a (fairly) narrow tunnel. Shazam poured a flask of oil on the floor and Cnut lit it with a torch. That stopped the second spider-swarm fairly well.

Shortly after this, heading vaguely south through the caverns, the PCs came to a wide cave inhabited by Giant Rats - four of them. The PCs made pretty short work of them to be honest, there are seven of them at the moment and I think everyone has plate mail (Gibbet the Thief wasn't here, he's about the only one that doesn't wear plate). They didn't search the room however...

Pushing on, the PCs came to the cave where the standing stones are. Big black slabs deliberately set into the floor, and of a kind of stone unlike the stone of the caves. But not, apparently, set up to any purpose that the PCs could find. Should the stones have a purpose? It's difficult to know what to say really (especially as my players are now reading the blog). Sometimes, things that look significant will be just window-dressing. Sometimes, things that don't seem to have significance will be important but you missed a clue or don't yet have another piece of the puzzle that helps to understand why they're important. Should eight huge monoliths (yes, we did decide it was an 'octolith') in a cave have a significance, and if so, what? Answers in the comments, or if you don't want my PCs to see, to redorc01 at yahoo.co.uk please...

While there, they became aware of a faint glowing in the east. Not the dawn, some Fire-Beetles. So, the PCs hid in the stone circle and shot the beetles to death. Of course they harvested as many glands as they could, ready to sell them to Gisuintha the Mage.

Then it was off to see if the Undead marked on Ningal's map had any treasure. It turned out that there were a several caves of Undead, one of Ghouls, and two of Zombies. I found some more clerical errors in my file here, repeated room descriptions including a repetition of the standing stones. Oops. Must get better at spotting those sorts of things. And despite having 'Zombies' marked on the map for the second Zombie room, there was nothing in the room description. Never mind, it's easy enough to generate a stat-bloc of monsters using the Labyrinth Lord monster generator here. The Ghouls and Zombies were down two different tunnels next to each other; the Ghouls (with another cave beyond them) in one tunnel and the Zombies in the other.

So anyway, three rooms, containing three Ghouls, eight Zombies and 11 more Zombies - the party fought them, Gwynthor tried to turn them (he succeeded in turning some of the second group of Zombies), and the party managed to avoid Ghoul Paralysis while taking a couple of minor injuries from the Zombies. These are for the most part fairly big caves, so the party is usually able to utilise missile fire fairly effectively - especially on slow-moving opponents. In the end even 11 Zombies didn't cause them much problem.

So, they collected the treasure from the Ghouls - including a really useful magic item I think, a Bag of Holding - and those Zombies that had loot, and Galen and Shazam searched the room beyond the Ghouls but didn't find anything. They also saw that in one of the Zombie rooms, a shaft went down into darkness. The party dropped a torch down there, then threw some oil after at - I decided that it was effectively a 'to hit' roll and not disappointing, Berg - I think - rolled a natural 20. So, the oil flask hit the torch and exploded in fire. Unfortunately, the PCs couldn't really see much of the room down there, as they were still looking down a narrow shaft. They decided not to venture down.

By this point is was getting fairly close to the end of the session. Discussing what should come next and whether they should go and murder Ningal, I decided to remind them that they hadn't searched the room where they killed the Giant Rats. I occasionally allow them a check against Intelligence for things like that. So the PCs remembered and decided that it may be a good idea.

Heading back they ran into a Shrieker, but they managed to Sleep it enough so that didn't summon anything else. Then they chopped it into bits. It didn't seem right, Sleeping a giant mushroom, but I couldn't find anything in the rules to prevent it. They also came face to face with yet more spiders - so the again party used fire against them. They are very easy to drive off.

After that they ducked down the side-passage to where the Giant Rats' cave was, and there was the loot they'd left. The Rats had been nesting in a rather nice shield. There was also a gem there. The party picked up the loot and stuffed everything into the Bag of Holding.

The PCs finally got back the entrance, where they noticed a Green Slime, but managed to avoid it (as they only move 3' per turn). And that was pretty much it - they were out the caves and heading for the city, ready for an evening's drinking and generally mollocking about Rift City, organising whatever needs organising - presumably, including selling the Fire Beetle glands to Gisuintha the Mage.
Posted by Red Orc at 15:59 No comments: