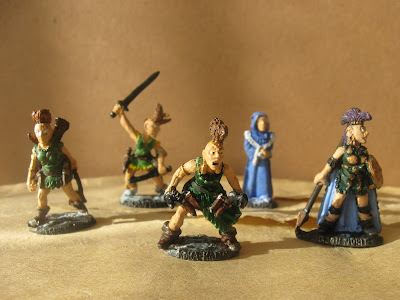 These are my Amazons closest to completion. I can't find my Mother Superior mini (can't remember if it was Mother Samantha or the other one, but I'm sure I had one); also sure I had the Amazon with the bow; no idea where they are. 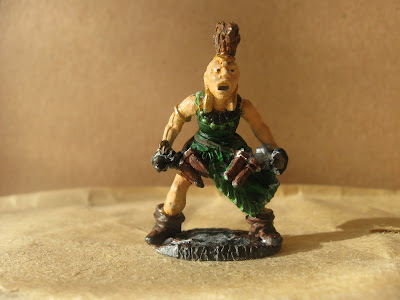 The best so far


She even has eyes that don't make her look like a heroin-addicted panda! 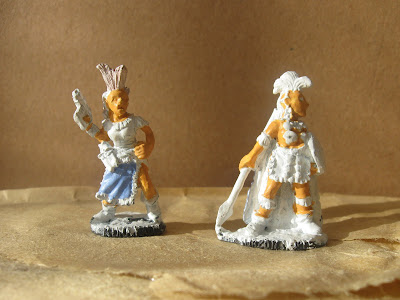 Two of the less-painted ones

Including the famous Amazon-Devout-with-High-Age-Weapon, who absolutely will see action as a futuristic gang-member. There are a couple of other Amazons with only undercoat on. 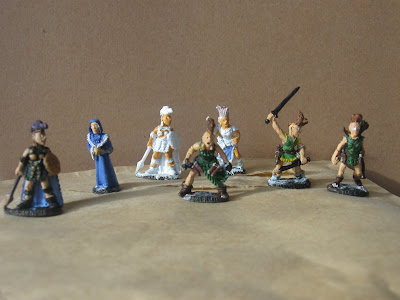 All those that have any real amount of paint at all


As it says in the title, if they've got more than undercoat, they're in this pic. 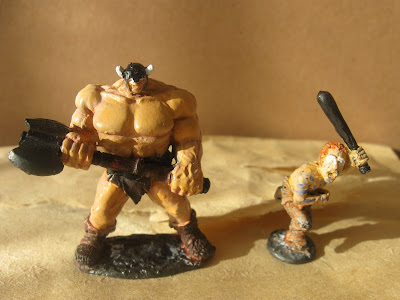 From the White Dwarf Personalities Set, Thrud the Barbarian, and Livingstone the Editor, 'an obscure sub-class of Thief'.

Email ThisBlogThis!Share to TwitterShare to FacebookShare to Pinterest
Labels: Amazons

Sundering Elf Quest of the World Tree or something

Ok, bear with me. This may turn out to be me having a mental breakdown, but...

I like Elves. OK, my Warhammer armies are 1-Orcs & Goblins and 2-Dwarfs (though I insist on spelling them Dwarves, because I'm a Tolkienist)... but I still have a few Elves knocking about, even though I'd be hard pushed to field a legal WHFB Wood Elf army with them.

I would also like the jury to take into consideration the fact that my first D&D character, in 1980, was an Elf. I've got history here.

Fast forward 32 years, and I'm trying to get my kids playing D&D, so I'm perusing the WotC website looking at images to make standees from (see this thread on the Lead Adventure site) and I come across the following picture (which is of Forgotten Realms Elves, (c) WotC, illustration by Steve Prescott): 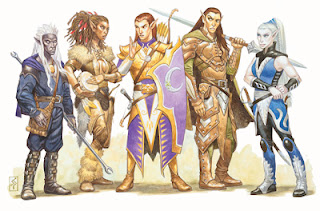 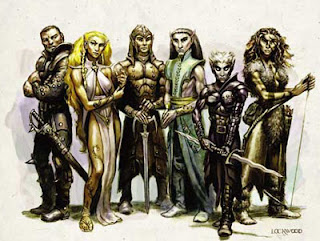 ...which I found on the Forgotten Realms wiki (though I'm pretty sure it's also from the D&D site originally): apart from the human on the extreme left, it also shows a Sun Elf, Wood Elf, Moon Elf, Drow (though this Drow's skin seems much lighter than the Drow in the previous picture), Wild Elf.

I know different D&D settings also have other Elven races - Shadow Elves in Mystara, for instance.

These got me thinking. How many sorts of Elves are there, in different settings?

I know about Tolkien's Elves - rather more than any sane person needs to probably. 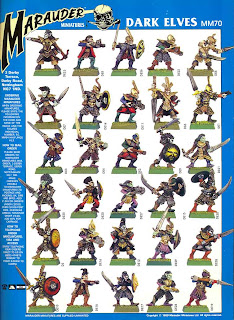 - has some Dark Elves with a sickly zombie-like greenish cast to their skin). (image from Stuff of Legends, showing Marauder Dark Elves, (c) Marauder Miniatures, 1989).

However, the Dark Elf from Talisman (the Talisman Dungeon expansion, from 1987) has blue skin, and in that sense is more like the D&D Drow (image (c) Games Workshop 1987) 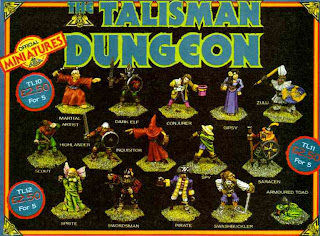 In the world of Azeroth (Warcraft) I think there are two sorts of Elves - Night Elves, with purplish skin, and the evil Blood Elves, with pale skin.

I don't really know how many other examples there may be. Possibly lots.

The point is, I'd like to put a force together that includes all of these Elven races, and any more I find out about. A sort of Elvish United Nations. My justification will be that in whichever great forest these Elves are now (Athel Loren, Canolbarth or wherever), they have come there from many different worlds, drawn by the Vision of the World Tree, a magic world-spanning ur-tree that calls suitable Elves to it; they can then travel between the different world where the World Tree exists, probably to combat threats against the World Tree itself.

Now this won't be fast, but hopefully it'll be cool. First job is to find a suitable box of minis...


All images are used without permission under fair use conventions.
Posted by Red Orc at 06:56 1 comment:

This is where fantasy gaming things will be collected.