This is the state of play as of yesterday afternoon - with the Orc archers getting substantially more paint on them, the Goblin cavalry sadly in need of something to save them, one of the planned Goblin wizards coming along well enough and some paint on my Goblin banner-bearer, the bolt-throwers and crew at least started, and my unit of spearmen coming on OK - getting some more shields, and painting the bases, is next for them.. Oh, and because I forgot to photograph him last time, I've included a few shots of my Orc 'Krudger' (a hero-type excelling in close combat).

Raising the Standard - some more paint on day 11


Eagle-eyed viewers will see that a few of the Orcs have purple or brown skins. This is because I see no reason to follow Games Workshop's painting conventions; as long as I've had Orcs I've had a few that were purple or other colours. Even going back to when I was about 13 and first starting to collect them, I planned that some of them would be purple; this was of course the time when Orcs were generally painted brownish anyway, and as far as I'm aware, Orcs aren't racially-prejudiced. So there's no reason why 'Red Orcs' (yes indeed) wouldn't be welcomed into the tribe, is what I reckon.
Posted by Red Orc at 09:12 No comments:

Raising the Standard - before and after (WIP shots, Day 8)

It's now day 8 of the challenge I set myself (well it's really day 9 now, but this was the state of play at end of day 8) - apologies for the poor state of some of these pics, the light's not very good today.

The as-yet unpainted Goblins (including the 'Very Tall Goblins' who crew the warmachines), and some Orc archers, ready to get their spray of black... 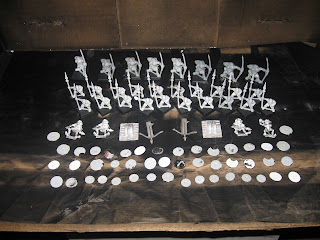 And the very same having been sprayed: 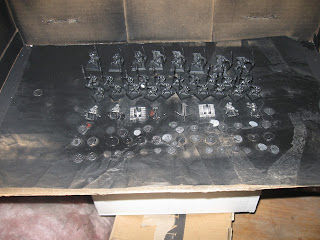 I'm beginning to think that it may even be possible to complete this! I wrote a little list of the units I need to build and paint which looks like this, as of Monday evening (20th May - 17 days to go):


O3: 'Krudger' (Orc hero), build and paint - complete, I had a nearly-complete mini for this lying around so I stuck an arm on and repainted his shield

Somehow, I forgot to take his picture...


Feeling good about this, beginning to see the light at the end of the (Goblin) tunnel...
Posted by Red Orc at 07:59 No comments:

Raising the Standard - the Goblin forces

Raising the Standard - first pictures of the Orcs

Raising the Standard - putting together an army in 25 days, Day 1

Well, I have a game of 'Kings of War' coming up and need some new units for my Orc and Goblin Army (armies really, as Kings of War uses different army lists for Orcs and Goblins... and I've just realised I'm using the last iteration of the rules, so I'll have to check what's going on with 3rd edition).

I'm hopefully going to be playing two encounters - one a small engagement at 1,000pts, the other a big battle. At the moment, I'm discussing with my opponent ideas about making the two battles tell some kind of story.

There's no way I can get everything properly painted and based but I would like at least to get some paint on the minis. I'd like to be able to get the following units painted up - and indeed for some of them, built - in time for the battle:

G1 - 20 Goblin spearmen ('Sharpsticks'), including banner bearer (a flag attached to a spear is fine for this, I'm looking for one with a spider on it to match some of the unit's shields) and a musician - I'll probably using a Heroquest Goblin and converting him to make a drummer.

G2 - five wolf-riders ('Fleabag Riders') with spear and shield, to add to the five (including banner and musician) I already have. These additions will I hope make the unit much more resiliant. They all exist, luckily, it's just a question of painting them (maybe gluing some spears back together) and finding some bases for the wolves.

G3 - a banner and musician for my 'Rabble' unit of close-combat Goblins. Again, I'll have to make these somehow. Another Heroquest Goblin for a drummer I think... do you see a pattern emerging? I have a banner-bearer that might serve here, but again he needs painting.

G4 - a selection of Hero figures; perhaps a couple of Wizards, a hero ('Biggit') armed with a bow and another banner bearer ('Flaggit') might be in order here.

That little lot should give me plenty of options for my Goblins, increasing my potential force from 825 to 1200 points.

For my Orcs, I think I need:

O1 - 14 Orcs that need painting, to add to an already-existing unit to make a new 'Ax Horde' of  'Chaos' Orcs.

O2 - 16 Orcs including banner bearer and musician (I'm going to be using a converted Heroquest Orc as a musician... bet no-one saw that coming) for a second 'Ax Horde' (I'm planning on splitting my existing Ax Horde into two groups, and adding these new troops to make two new Hordes). Some of these will require assembly I'm certain. These guys will be the 'Yellow Moon' Orcs, as the existing ones have yellow moons on their shields.

O3 - a Hero ('Krudger') which I can make out of some Black Orc bits I have lying around. He's dependent on getting the 30 Orcs from O1 and O2 sorted - can't unlock another hero until I can field another full unit. He's the reward for painting 28 Orc warriors and building a standard-bearer and musician.

O4 - 10 archers ('Sniff') to give me some much-needed firepower, as Orcs are the only army that can't unlock war machines.

That's 305 points of Orcs that I can add to my currrent 880 points. At a combined total of 2,385 points, that should give me a certain flexibility when chosing the 2,000 I need for the big battle.