One more for the Observer's Book of Monsters 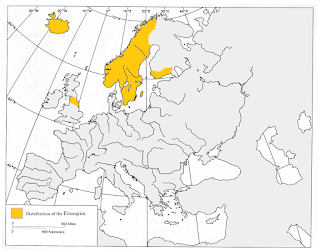 The Fossegrim ('Waterfall-spirit') is as its name suggests a spirit that lives in a waterfall. They are always male and mostly found in Scandinavia. In Sweden they are sometimes called 'Stromkarl' ('River-man'). They are very talented musicians apparently, and can with gifts of food sometimes be tempted to teach their skill with fiddling and harping to mortals. They also mate with females who go bathing at the waterfalls; if the offspring of this union is male, it will on reaching adulthood reveal its Fossegrim nature and find a waterfall to inhabit.

Distribution based on approximate usage of the term 'foss' (Norwegian, Icelandic) or 'fors' (Swedish, I kinda guessed about distributions); in Northern England, especially in North Yorkshire and Cumbria, there are many waterfalls called either 'Foss' or 'Force', so it seems reasonable that Fossegrimen live in them.
Posted by Red Orc at 04:54 No comments:

Well, it's certainly that time even if there's no snow here... and I thought I would post with the gamiest thing I received as a Christmas present this year, from my lovely brother and sister-in-law; Diana Wynne Jones's "The Tough Guide to Fantasyland".

Written somewhat like a "Rough Guide", it is based on the principle that Fantasyland is a real place (with Embroidery, Rabbits and Dark Lords and other such arcane subjects) and the important information about the place is included in the book. It's a little bit like early Pratchett in some ways; a good-humoured and affectionate piss-take of fantasy tropes.

It is a) very funny (it's funny because it's True - Diana Wynne Jones knows her stuff of course), and b) very sobering (because one recognises many of the clichés that one liberally sprinkles over any fantasy gaming/fiction endeavour), and c) very enlightening (because by analysing the clichés and pulling them apart it's sometimes possible to find the bits that work while discarding the bits that are overused). It goes as much for fantasy gaming as for fantasy writing I think, and will I hope allow me to either a) avoid or b) play up the clichéd elements as appropriate (because sometimes, it is appropriate).

It has also left me wanting to write two things: first, a fantasy series that uses (literally) every cliché in the book, and second, a fantasy series that subverts every cliché in the book. Can we imagine a fantasy world where witches don't attempt to seduce unkempt strangers who are not lost heirs, while hordes of Barbary Vikings don't drink ale and have good-natured fights using battle-axes, and avoid sacking nunneries from which there won't be one survivor? I'm not sure but I'm suspecting I'll have a lot of fun trying.