The Fortunate Isles - an invitation to readers

I'm going to open an invitation to readers to submit details of the many and various islands that make up the Fortunate Isles, Isles of the Blessed, the Summer Isles, Tir na nOg, or whatever one wants to call the mystic islands that lie in the uttermost west where the dead go, the fairies live, witches share eyeballs, evil sisters turn adventurers to stone, dying kings go to sleep in caves and whatnot.

All images from a Google image search for 'Isles of the Blest'. 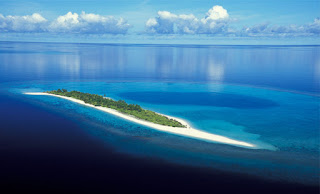 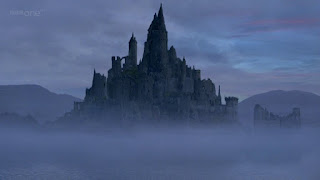 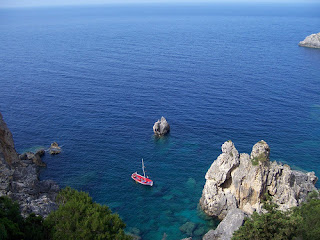 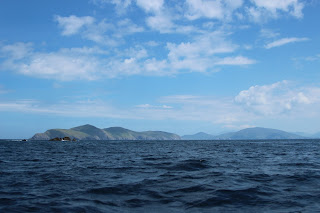 This is somewhat inspired by people like John M. Stater (at Strange New World and Land of Nod), and Greg (at Gorgonmilk)'s frequent invitations to submit content for a variety of projects. Other people do it too, of course, but those are blogs that I've particularly liked being involved with providing content for.

In my campaign world, there is a region of islands which were once part of an Elf-Kingldom, but are now ruled and mostly peopled by humans. It's a bit like a version of Arthurian Britain, with Knights, quests, tourneys, maidens captured by giants or riding unicorns, riddles set by wizened crones, Pixies and wood-spirits, and what-not. 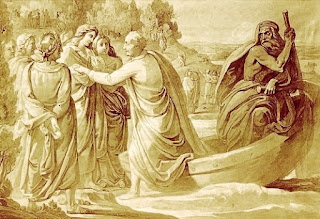 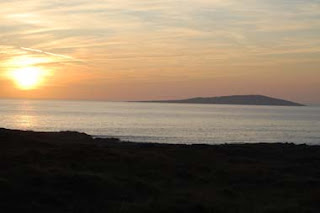 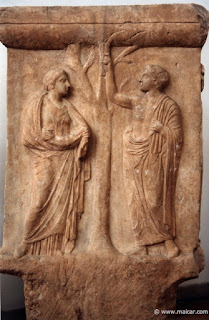 Toying with the idea used by noisms for 'New Troy' over at Monsters and Manuals, where there is a Fairyland that is a 'parallel universe' to the 'real' game universe, I thought that I could detail a set of islands to be randomly dropped into any attempts to sail around my 'real' archipelago. These islands would only appear in certain phases of the moon, under certain atmospheric conditions or just as a result of a random roll, in previously-open water or in the place of another island, representing ghosts of the former land, psychic projections of the lost inhabitants or just magically-hidden isles that PCs can discover.

My conception is that the Fortunate Isles are not so much a Mythic Underworld as a Mythic Otherworld. This will perhaps be a bit more 'wilderness-y' than 'dungeon-y', but I'm not going to be too hung up on that. Re-reading some of the 'New Troy' stuff, I see that I lifted that idea from there completely, even down to the way I phrased it. A very good idea then, that germinated in my head for 6 months before popping up again so that I thought I'd invented it. 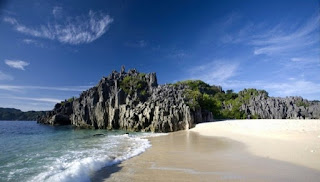 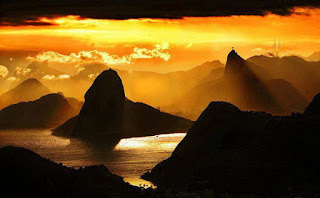 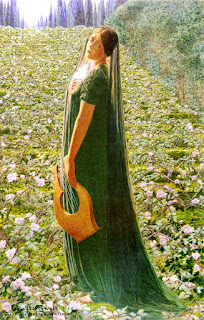 Any way - each of the islands has a few distinctive characteristics that render it a bit strange compared to the 'real' world. Like different zones in a dungeon, different islands have different habitats and inhabitants, even perhaps different laws of nature. Maybe, another way to look at this is that each of the Isles is like a different 'room' in a mega-dungeon. However one wants to conceptualise it, the islands are different locations and I'm issuing a call to add short descriptions to help to make up the many ... many many, islands of the group.

I think there should be a thousand of them. That's a bit crazy to be sure, but... why not? 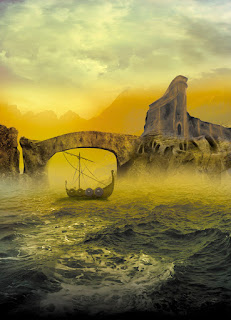 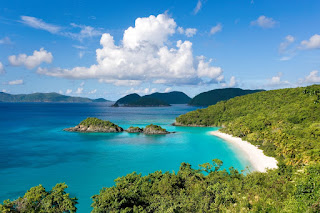 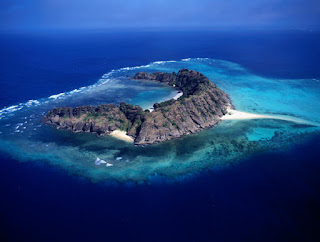 I will adopt the following conventions in description - a 'small' isle is one where no axis is more than one mile (1.6km) long; a 'medium-sized' isle is more than a mile and less than 5 miles (8km) in its longest dimension, and a 'large' isle is as least 5 miles long. Other terms like 'very large' and 'huge' may be dropped in but I'll try to remember to clarify what they mean in the description. Please, add further islands if you have any ideas... I may well die before I can sketch out all 1,000 of them!

Island 000 - the Isle of Stones - small island
Three enormous monoliths stand together at the highest point of this unpopulated island. They are ancient and have symbols carved on them that defy attempt to Read Magic or Read Languages. There is space for perhaps six people to stand between them, Standing in the space between them at night will grant one PC access to a Wish spell. Only one character can take advantage of this, even if the space is fully-occupied.

Island 001 - the Isle of Storms - large island
Storms surround this island, and it always rains here. It is particularly likely to be found if the PCs have been experiencing bad weather for three days or more. The inhabitants are normal humans, but fire-based technology is almost unknown here. Iron (weapons, armour, tools and equipment) rusts (in 1d6 days, add one day for any magical pluses). The Islanders live in small villages - there are around 12 on the island and no central control - and cook food by placing it inside animal skins and lowering these into hot springs. Each village is built round such a spring. Even using torches is met with much disapproval. Only lanterns are used by the islanders to provide light; naked flames are considered evil. Any spell-casters using fire-based magic in public will be hunted down and thrown in a (very) hot pool as an affront to the Islanders' deity.

Island 002 - the Isle of Unicorns - large island
This large island is mostly grassy with some wooded areas. The weather is always warm. There is a lake, in a wood, at the approximate centre of the island. A breeze is always blowing out from this wood, and the whole island is wafted by it, carrying along white blossom from the trees,  no matter what time of year it is elsewhere. A herd of unicorns lives on this island. There are several unicorns with riders, and some without. The riders are generally young Elven or Human women, though other races (and perhaps males, depending on one's interpretation of the word 'maiden') can be represented if the DM wishes. If the PCs try to harm the unicorns, the riders will attack, while the rest of the herd flees. The riders wear no armour, but can carry any weapon. There is only one way to 'catch' a unicorn to ride. A maiden must sit naked under one of the trees by the edge of the pool all through the night of the full moon. A unicorn will come to her after 6+d6 hours. It might not be obvious if the PC is a virgin; to randomly determine this, subtract the PC's Charisma from their Wisdom. Add +1 to Wisdom for every Cleric level the PC has, unless it is in the service of a deity of Love - in this case +1 to Charisma for each Clerical Level. A negative score means the PC is not a virgin, and no unicorn will appear.

Island 003 - the Isle of Honey - small island
This island is the home of a giant swarm of Killer Bees. The whole island is the hive; vast quantities of healing honey can be found here, but the swarm is a formidable challenge.

Island 004 - the Isle of Wrecks - medium island
The shores of this island are strewn with wrecked ships. The inhabitants are former sailors turned scavengers, scattered among many small settlements, which generally spring up from the surviving crew of a beached vessel. Few are women, and many were pirates. There are very few youngsters, and much of the population is involved in feuding and raiding of other settlements. They are well-armed, and generally hostile, The reefs around the island are particularly good at smashing up boats; as such, there is never enough wood to build a viable craft from wreckage, and anyway, the inhabitants are so unwilling to co-operate with each other that they are incapable of pooling their collective resources to build an escape-vessel, or even a craft capable of raiding one of the other islands.

Island 005 - the Priestesses' Isle - small island
Seven Elven priestesses robed in white guard this isle. Three will be praying and singing in the sacred grove at the centre of the island; three will be sleeping in a bower nearby, ready to take over at dusk or dawn, and the seventh will be doing menial tasks concerned with cooking, cleaning and gathering food for her sisters. On subsequent visits, a different priestess will be doing the menial tasks, as they rotate their duties. The priestesses are not hostile unless the PCs initiate conflict, but they are uninterested in the events of the outside world. If PCs perform a quest for them involving visiting another island and returning with a specific item, they will use magic (healing or divination) on the PCs' behalf.

Island 006 - the Isle of the Healing Spring - medium island
A spring rises in a glade on this island, forming a small pool. The area is lush and looks full of life. Any PC bathing in the pool for more than 10 minutes can heal d20 lost HP, at the rate of 1HP every 10 minutes (they will never gain more than they originally had). In order for the healing magic to work, the PC must be naked and weaponless. They will not know how many points they can heal - the pool is fickle. After this time, they will age at the rate of one year for every minute they spend in the pool. Subsequent visits to the pool will produce this ageing effect immediately. The ageing effect is irreversible.

Island 007- the Isle of Strange Fruit - medium island
This island is covered in large trees which produce giant dangling, bulbous fruit with a leathery-looking skin, approximately man-sized. Any character trying to pick the fruit must make a Charisma test. Failure will mean that the 'fruit' falls from the tree, then splits open to reveal a random monster (use a Wandering Monster table for the character's level, or for a bad failure, of a level or two higher). The monster will usually attack the character. A successful Charisma test will produce enough fruit for a day's rations, and a small quantity of gold and silver coins (more coins for a spectacular success). The trees can also be Charmed to produce fruit rather than monsters. Treat the trees as level 5 monsters for saving throws. The fruit, if not eaten, will turn to dust at dawn the next day. Any attempt to eat this dust will require a Save v Death Ray, or the PC will turn into a tree themselves, over d6 x 10 minutes, unless a Remove Curse or Wish spell is deployed.