The Gallery of Statues

Greg at Gorgonmilk, it's all your fault.

This is part of Greg's project to build a shifting Borghesian 'meta-dungeon', possibly the home of Stheno the Gorgon.


I really like Greg's idea here: the notion that the geography shifts around the explorers. Even if you manage to find your way back to a room you visited before, there's really no guarantee that the exit(s) from the room - even if it is the same room - will take you back the way you came.

In fact, it's not certain that it's actually the same room, or a different version of the room, or the room at a different time, or an imperfect memory of the room the party left, or what exactly is going on at all. I really like all that uncertainty.

So, I built some rooms - 2 so far - for the dungeon, or villa, or whatever it is. These can be found over at the Gorgonmilk blog.

Both rooms use random elements. The first - the Room of Mirrors - uses some random mutation tables. I'm sure these are readily available - though a quick search has left me unable to find any suitable tables. Maybe I need to do my own, or maybe I need to look harder. Two tables are needed - one for cosmetic mutations such as changed skin colour, and another for more serious mutations such as snakes for arms.

EDIT: I've now made some tables that can be accessed from Seventh Order of the Random Generator, under 'Mutations', the 'Major mutations' and 'Minor mutations' tables, or access them direct from here - Minor Mutations and Major Mutations

The second room has variable and potentially randomised statues. Though my post to Greg's blog is quite short, I did a much longer post with a bunch of random tables for the creation of the statue set. I also ran through an iteration to actually produce a single room. However, for the purposes of posting on Gorgonmilk, I thought the bare-bones version made the most sense.

I will be putting the full thing into a dungeon somewhere. I haven't decided exactly where but by its very nature it will be at some kind of planar junction. Time and space are different here. Anyway - for what it's worth, here's the iterated version, which may be dropped into any dungeon fairly unproblematically.


The Gallery of Statues

This room is around 40’ (12m) long and 15’ (4.5m) wide. The room is a kind of hall- or church-like structure: it is taller than it is wide, around 20’ (6m) at the walls and taller in the centre. The doors open into a kind of long gallery with raised platforms to either side, lined with tableaux that resemble statues of Greek myths found on the Parthenon friezes. Above the statues is a row of small windows, 6 on each side – no matter whether this room is in an underground complex or wherever else it may be encountered. If the characters can somehow gain access to them, they will see that those on the right of the room look out on a garden at night, while those on the left look out on a beach by day. Both the beach and the garden appear to be dotted with statues, much like the room.

In the room, there are 6 tableaux on each platform, with single, paired or multiple figures in each. The tableaux on the left side of the room appear to be of white marble, and the statues on the right side seem to be made of black marble. 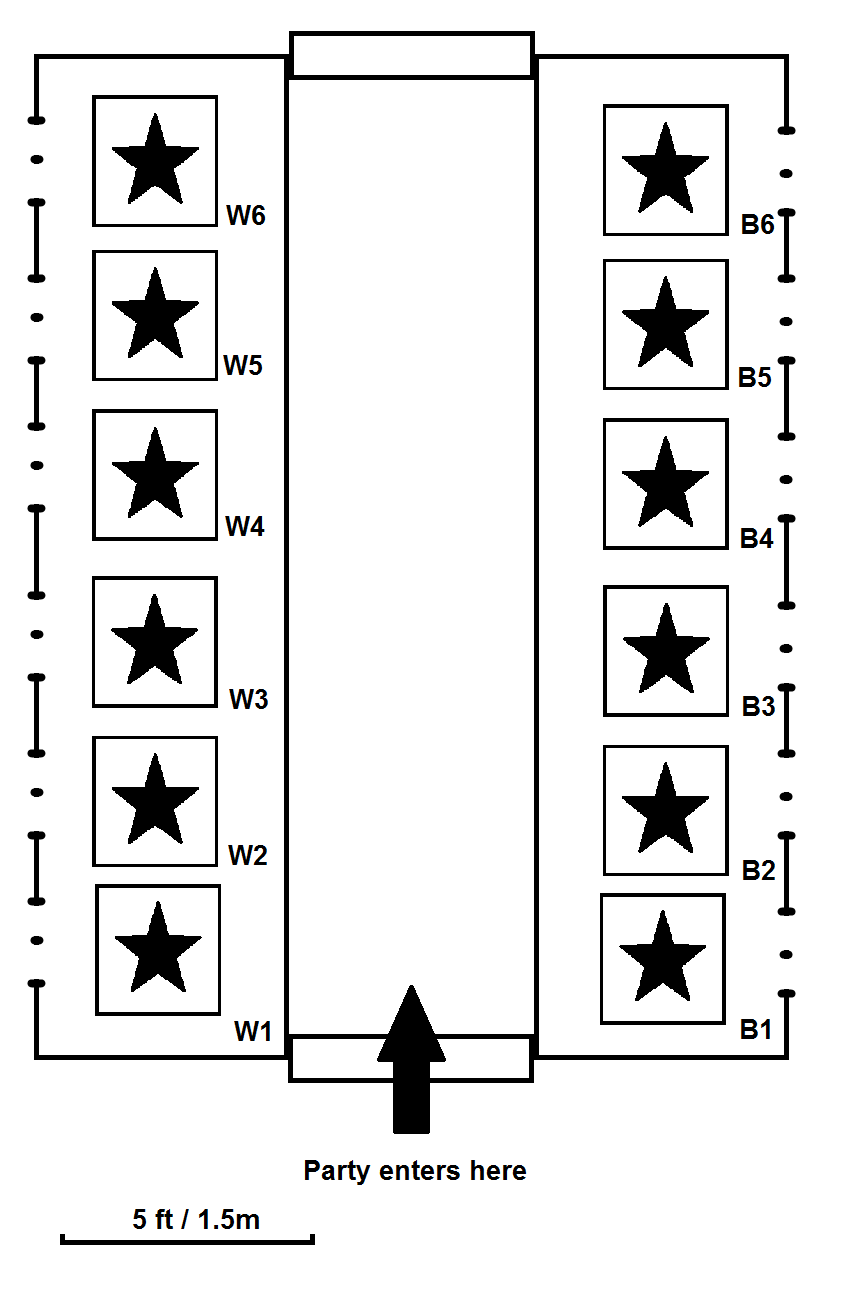 B1 – a male Elf in leather armour, with a sword and shield, is fighting a female water-spirit wearing a ripped tunic and carrying a short-sword

B2 – a winged female being clad in long and flowing, though revealing, robes and wielding a spear, attacks a naked male Elf, while a naked female Orc tries to protect him

B4 – a Dryad, naked but for a helm, armour on shins and forearms, with a scabbard on a baldric, and carrying a sword and shield, is trying attack a naked female Elf; a Boar is attempting to defend the Elf from the Dryad

B5 – a male Orc in tunic, chain, helm and with a sword and scabbard is attacking a Giant Snake; a female winged divine being, naked but for a full-face helm and short skirt, and armed with a bow and 6 silver arrows, attempts to defend the snake

W1 – a Naiad, clad in a single piece of flowing silk, carrying a net and with a living snake for a belt, looks on warily

W2 – a semi-naked, winged male divine being and a semi-naked female Elf are trying to seduce each other

W5 – a male Elf, naked but for a living snake around his neck and carrying a two-handed sword, fights a female Elf wearing only a helm, and armour on her shins and forearms, and a scabbard on a baldric. She carries a shield and sword

The figures in the tableaux are real, but to the casual observer, will appear stationary. They are engaged in the activities depicted in the tableaux; they will continue to do these activities forever – seeing them move very slowly will require a Detect Secret Doors roll. The tableaux do not interact with each other, or with onlookers, except under very specific circumstances. Characters can interact with tableaux only by climbing onto one of the platforms.

In this case they can join in with whatever activities are happening on that platform. Once up there, characters see everything in natural colours – the marble statues now seem perfectly real, the middle of the room with their friends is indistinct and the opposite side of the room is practically invisible – the ‘white’ side seems flooded with blinding light when seen from the ‘black’ side, and from the ‘white’ side, the ‘black’ side is shrouded in darkness.

If there is a fight, characters can join in, though the statues are very hard to hit – only a natural 20 of any attack will harm a statue (no matter what the skill or level of the character). Magic weapon bonuses (but this is all) can increase the chances to hit as normal. Each statue has d6 damage points; each successful attack will only do 1pt of damage (no bonuses will be applicable). Dead figures will become statues of the dead, to observers. It is up to the DM to decide what effect spells such as 'Stone to Flesh' or 'Petrify' might have, depending on whether the DM sees these as animated statues or petrified humans etc. Likewise, it is up to the DM whether magic weapons specifically designed to smash stone or harm stone constructs may slay these living statues on any successful d20 hit.

However, each side of the room will only ever have as many figures as it started with. For each character that joins a tableaux, roll a d6 every 10 seconds. If the number is equal to or lower than the number of 10-second segments that the character has occupied the tableaux, one random figure from that side of the room will step of its pedestal and attempt to leave the room, taking anything portable that it had as a statue with it. If this is a single figure, another figure from a neighbouring pedestal will then step onto the vacated pedestal. This new arrangement will then be the same on subsequent visits to this room (if that is possible), unless characters further interfere.

White marble figures from the left side of the room will leave from the doors at the far end of the room; black marble figures from the right side of the room will make their way to the doors the characters entered by. The figures seem uninterested in the party and are merely trying to leave. If characters attempt to stop the figure, it will either fight or attempt to seduce them – using natural abilities, 'Charm' spells or any other suitable method – in order to be able to leave. If the PCs fight a figure before it leaves the room, it will have normal characteristics for a figure of its type. It should however not be any kind of pushover and will in general terms be as tough as the toughest character facing it (even if it’s a naked Nixie for example). If it is armed, its weapons will be as effective as well-made magical weapons (though not of Godly quality - say +2, or give each weapon a unique ability). If ‘killed’, the figure will shed any weapons or other portable objects it has while attempting to crawl back to its pedestal. In this case, the original character trapped on the pedestal can, with a successful save against petrifying magic, Wisdom, Will or Luck roll or similar, break free of the enchantment. If they cannot do so, they can keep trying though the GM should roll a d6 as before for each 10-second segment – and another figure could then step down. Any objects that a statue has been forced to drop are magical and have appropriate characteristics – musical instruments give the player (whoever that may be) the ability to cast Charm or Petrify spells, weapons are approximately equivalent to +2 to hit (or have unique abilities), water pitchers will never run dry and can heal wounds once per day, etc.

If the figures leave the room, there is no way that they can be compelled back or even found again, short of divine intervention, and no way that characters can leave their new pedestals, short of someone else joining the tableaux. In this case the character can leave if they make a successful Save as described above. Otherwise, a random roll is made as before and a figure (which may of course include the original character) will step down. It is up to the DM if any other method, such the party pitching a statue they may have found onto a platform and hoping that it animates, will be successful in releasing a character trapped on the platform.