Due to our usual venue being used as part of the Leicester Comedy Festival, this month our game was at Berg and Galan's house, and a very fine venue it was too, so thanks for putting up with us.

Having found Greydon breakfasting in the inn and looking for a party of adventurers to go raiding the caves, the PCs set off again for 'the bath-house of Blibdoolpoolp'.

In the first room, just inside the door, where previously they had encountered Harpies and before that Kobolds, the party found three humans who Gibbet quickly realised were 'legitimate businessmen' of some kind. There were barrels, something wrapped in a cloth, and a couple of chests in the room that had not been there before. Deciding that this must be some of the loot from the missing caravan, the PCs basically provoked the human chaps into starting a fight. They then butchered the men and looted them. It turned out that the barrels weren't stolen property - instead, it looked like the barrels (ale), cloth-wrapped cheeses and chests (of weapons) were being taken into the caves not out of them.

I don't know any more. Lots of things happened. A room was explored that seemed to be some kind of office, and this map was discovered... 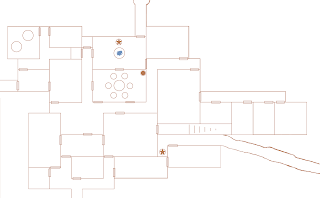 The PCs were exploring round the southern end of this. There were definitely fights with Orcs and evil Dwarves and some snakes and some Killer Bees and more Traders...

Somewhere, another map was found that looked like this (an actual treasure map!):


Bonjella got herself a fur body-warmer and some loot was to be had for definite, and then the party split up (I think, Greydon and Galan had passed out in a room that caused unconsciousness, and rest of the party dragged them out and left them in the first room, then went off to do something else)... this ended up with Greydon being hassled by a giant lizard as Galan ran away, if I recall correctly. The rest of the party luckily arrived as Greydon was about to be eaten, so they killed the lizard.

And that was about that...

Next session it seems we'll also have a problem with the venue, so the Wandering Monster Table will be on an extended tour... I hope I'll be better at telling how the next one goes!
Posted by Red Orc at 14:16