This is a post that I ... posted ... to Porky's Expanse! on the subject of 'Dragons & Dungeons', or the implications of inverting the order of monsters and settings in D&D.

Because I couldn't let this go, and because a couple of days ago I found some notes for a small lair I was going to design (but didn't get round to) I decided to have a go at creating the 'dragons' before the 'dungeon', and see if I could elaborate an ecosystem and let that define the space it inhabits.

1 - I actually rolled these randomly some time ago, so I didn't truly start with the monsters and work towards the dungeon from there, but I am treating what I rolled up, forgot about and found again as 'fixed' so the point is to try to get this backwards-design to work;

2 - I'm using a 'modern' version of the wandering monster table for the dungeon (it works on a percentage system: 01-40 gets you one of 5 encounters and 41+ is no encounter; you have 5 'wandering' encounters, 3 of monsters already 'fixed' in the dungeon, 2 of true 'wanderers' who have no base; it's based on location not turn - if you're in an empty room roll for a wandering monster, cross them off the list when they appear when they're all gone then that's it – I think this is reasonable enough for a small dungeon).

Instead of designing a dungeon and then dropping these monsters into it, I instead took the list of monsters and tried to relate them to each other ‘ecologically’. I drew a kind of flow-chart to show how the different groups relate to each other. In essence, my ecosystem is one of bees, flies and geckos, with the kobolds ‘farming’ the bees. The robber flies prey on the bees, but the geckos prey on the robber flies. The fact that every so often the geckos might prey on a bee, or a kobold, doesn’t bother the kobolds too much, as they mainly take out the flies which are a pest on the kobolds’ bee-farm.

The bugbear works for the kobolds as a bouncer – it provides protection, and the kobolds provide it with healing potions and allow it to snack on the occasional gecko. Thus the relationship is somewhat symbiotic – both sides are getting something out of it.

The green slimes are opportunistic predators – they don’t really care what they eat, bees, kobolds, flies and geckos are all much of a muchness to them.

The Dwarves are a raiding party. I had thought of making them evil mercenaries but the rival adventuring party is a bit of a classic and as long as I don’t allow the party to use them as ‘free muscle’ I’m happy with the possibility of a temporary alliance, but will assume the Dwarves will naturally have a -1 to their reactions (stacking with -2 if the party has Elves but no Dwarves, +2 if there are Dwarves).

What I need now is a ‘random location’ table, with some kind of range for size, to replace the monster tables, something like the following:

Perhaps I should start creating one…

The notes I wrote on this are quite literally on the back of an envelope. Then on the front. 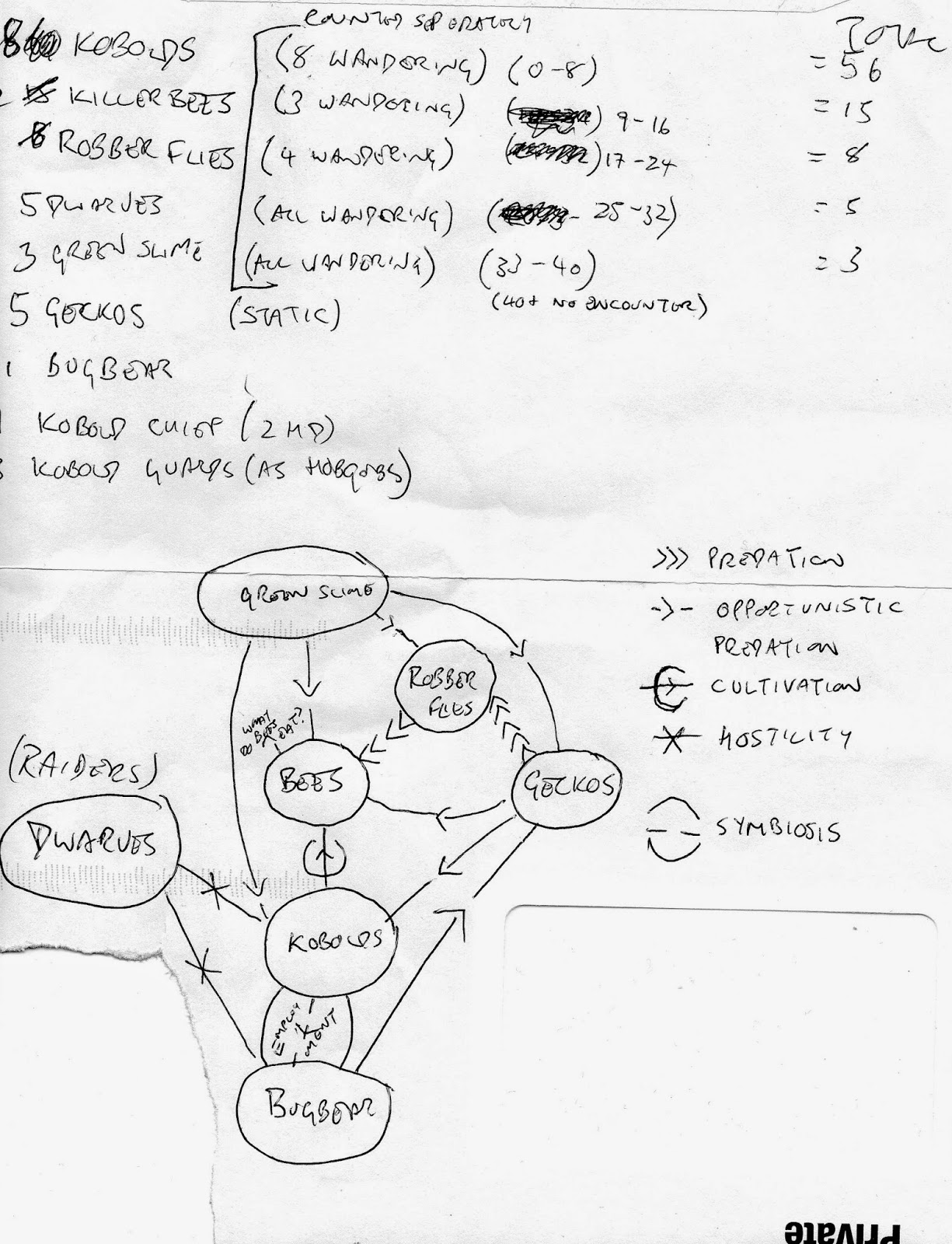 So, this is the diagram of the inter-relationship between the different groups. Of  course, this is a functional rather than spatial relationship in the dungeon. Not that, yet, there is a dungeon. That, I suppose, is part of the point.

There is an outstanding question here - on the diagram it says 'what do the bees eat?'. I suppose a better way of phrasing the question would be, 'what is the bees' source of nectar and pollen?'

I'm now thinking about giant underground flowers and how they might live. It may require a special location in the dungeon to house these flowers. That's fine, I think in terms of the logic of the design - sometimes in 'Dungeons & Dragons', a special monster is designed specifically for the scenario. Well, in 'Dragons & Dungeons' a special location can be designed likewise. In this case, a location with a giant flower (maybe in the ceiling) seems positively necessary!
Posted by Red Orc at 11:01